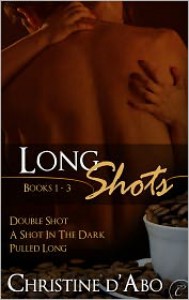 Review as a collective whole:

I really enjoyed this as a collection. Each novella stands on its own but read together it is quite enjoyable. I’m not quite sure what me request this title from NetGalley, but something made me take the risk and I am glad I did. The stories are not so hardcore to turn off someone like me who hasn’t read much erotica of this sort before and no M/M at all. You get your HEA (Happily Ever After) at the end of each story, which makes the romance genre fan happy. On top of that the characters are so very lovable. I fell in love with the siblings very quickly. They are a tight knit family that function as a family. Even as they are driving each other crazy as only siblings can do there is still the overwhelming feeling of love and protectiveness for each other. Also, there is a surprising amount of emotion involved in each story. In each story one or both of the partners has to overcome something, so this collection is not just fluff but gets you involved emotionally. The only downfall of this collection… not knowing if the owner of Mavericks, Josh is going to get his own HEA. He appeared in each story and is intriguing in his own right!

As a collective whole I give this collection a

Reviews of each story:

Sadie and Paul had been friends for 10 years, for that whole time Sadie has been nursing more then friendly feelings for her friend. When Paul invites her to Mavericks the local sex club where he works, she is unable to resist the temptation to go. As it turns out he has an offer she cannot refuse, her shop catering an event at Mavericks. I adored Sadie, she is cute and someone that inspires protective feelings. Her crush on Paul is also quite endearing, I like how she gets all flustered whenever he is around. Her behavior is exactly how you would expect one to act if hiding a crush on their best friend. lol. Paul, finally, finally seems to waking up to the appeal that is Sadie. When Sadie comes to visit him at Mavericks he challenges her to give up her fantasies. I like that she held out on him, even under a front assault in the bakeries fridge. It showed she is no push over. When Sadie does give up her fantasy, it turns out to be a doozy, it involves Paul and …. But can Paul give her, her fantasy and still be able to be friends or more? Read to find out!

For three years after a relationship gone wrong, Paige has been denying herself what she needs most. Her sexual tendencies are far from vanilla, but she no longer trusts herself to get what she needs from a man for herself. She is starting to fall apart when Carter walks into her coffee shop. It’s obvious he’s on his way to Mavericks the local sex club and from his stare she can tell he’s a Dom. When Carter asks Paige out her body is SCREAMING at her to say yes, but her head is saying no way! She knows Carter is a temptation and she doesn’t know if she can trust herself. Carter is sexy as hell and so very supportive of Paiges wants and needs. I’ve never had much interest in starting up the BDSM lifestyle but if I had a Carter staring at me, I don’t think I’d say no! LOL. I felt so bad for Paige, after an experience gone so horribly wrong I don’t blame her for giving up the lifestyle and exactly what she had thought would happen, did. This tale is really about Paige learning to trust not only herself but in her partner as well. But trust is not something that comes easy for anyone but especially not as easily for Paige and she may never be able to trust what’s right in front of her.

Ian and Jeff (AKA Blue Eyes):

So, I have never really read M/M (I am not counting Qhuinn and Blay AKA Qhuay from BDB), so when I saw a M/M couple was apart of this collection I was slightly intrigued. I figured here was a chance to get my feet wet with the concept with a novella that was apart of a collection. If I didn’t like this part of the collection then there were still two other tales to enjoy. Ian from the first book you adore, you just can’t help but love him. He is so openly affectionate and supportive towards his sisters. We meet Blues Eye’s also in the first book when he comes into the coffee shop for the first time and an instant flirtation sparks up between him and Ian. So you have two books prior to this one to start rooting for this couple. As for the erotica part of this tale it is pretty tame, I’m not sure what to expect but it wasn’t too much and it never made me uncomfortable. As for the romance aspect, I was rooting for these two from the beginning, I really liked Blue Eyes from the first book, but liked him even more as Jeff as Ian’s love interest in this book. Jeff is amazingly supportive of Ian, even when Ian pushes him away, repeatedly. You see, Ian has a secret, one that has been eating away at him for 10 years. This secret may just be the wedge that tears these two apart.

Received title from Netgalley for an honest review
Tweet