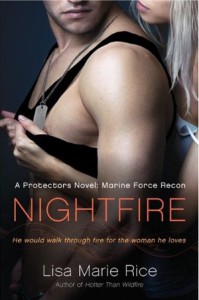 This hot and steamy title was available on Amazon for $0.99 for the month of December or maybe it was January, and when I saw that cover I had to have it! Let’s face it that is a pretty smoke’n cover! I didn’t really have any expectations from this book. I’ve never read this author before, so I didn’t have anything to base it on. I have to say I quite enjoyed it. Is it the best book I’ve ever read, no, but it was an enjoyable read.

This is a hot and steamy read; the passion ignites between Mike and Chloe. When this book first starts Mike is what they would call a “rake” back in the day. He goes through woman like Kleenex. He has pretty much hit rock bottom at the beginning of this book. He doesn’t know what in the hell he is doing with his life anymore. He is a former Marine and a protector by nature. But the deaths of his family when he was a young boy have really messed with him. He’s been trying to fill a void with woman and it isn’t working anymore. Even tho Mike is kinda a hoe, you still kind of feel for him. He’s still a good guy, je just deals with his inner demons in a F’ed up way. When he meets Chloe he knows his life has irrevocably been changed. But when he comes up on charges of assault and rape of someone he barely touched he knows what little chance he had with Chloe is now gone. Six months pass and Mike cleans up his life, but Chloe is still out of his grasp. He contents himself with just being near her and helping her with anything she needs. All that changes and every protective instinct comes out when Chloe’s life is threatened. Now he is desperate to keep her safe, even against the Russian Mafia.

When we first meet Chloe she is so fragile, breakable like glass. She spent the bulk of her childhood in hospitals. Almost every bone in her body had been broken and she had to go through surgery after surgery. She was neglected by her “parents” and it isn’t until after they die that she finds out that her parents are not her parents and that she has a brother. This is what brings her to California and to Mike’s offices. We watch Chloe go from timid fragile to, to a confident woman that even faces down an Russian hit man. But it is Mike that she really has to tackle. Ever since that first day he has been keeping her close but at the same time at an arms distance and it is driving her mad. It is not until her life is threatened that the barriers that Mike has built start crumbling. She takes all that Mike has to give and gives him so much more. I really enjoyed Chloe’s transformation. She really grows as a character.

The story is pretty exciting. Anytime you are dealing with the Russian mafia you are going to have danger and excitement. Mike gets to kick some serious a$$ and really put his skills to work. On top of the danger Mike and Chloe steam up the pages. Their passion unfurls amazingly once the barrier that was keeping Mike from Chloe is gone there is nothing that can keep him from her. I’m so glad I picked up this title. If it’s still $0.99 I’d grab it too if I were you!